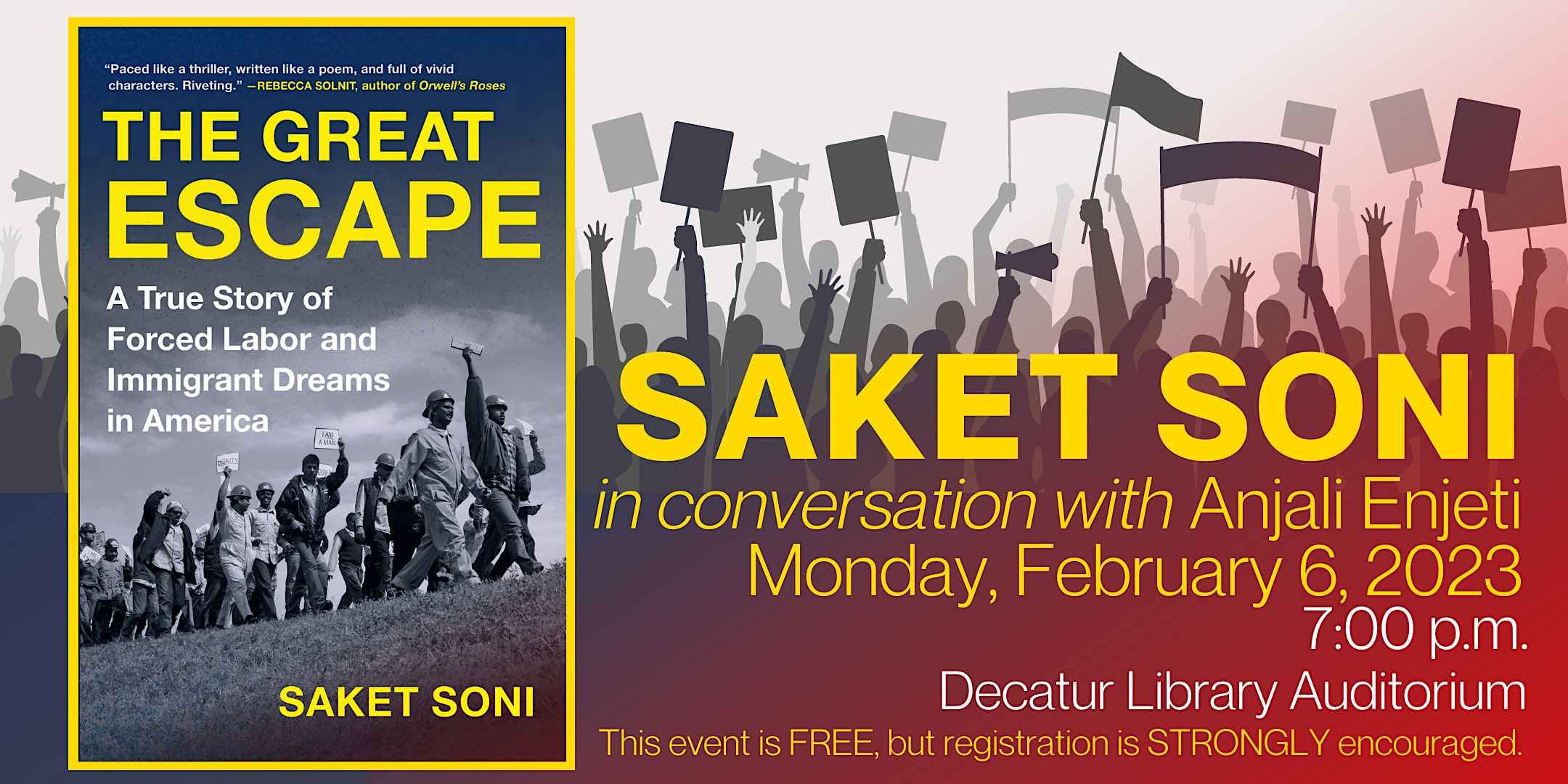 “It’s paced like a thriller, written like a poem, and full of vivid characters who’d enliven any novel, but it’s the true story one of the largest modern-day trafficking incidents in recent history and how Saket Soni and his crew went after the powerful perpetrators. A story as important as it is riveting to read.”

The Georgia Center for the Book welcomes authors Saket Soni and Anjali Enjeti for a a compelling and thought-provoking conversation about migration policy in the United States, the reality of twenty-first century trafficking, and the true costs of climate catastrophe.Soni's THE GREAT ESCAPE is a rare literary achievement. With elegance, compassion, and remarkable storytelling gifts, Soni has written the definitive account of a historic struggle for justice, the tragic, hopeful, and true accounting of America today, of its sins and its promise.

This event is free and open to the public. Registration is requested, but not required.

To pre-order a copy of THE GREAT ESCAPE to be picked up at the event, please place your order from our friends at Charis Books and More in Decatur by clicking the following link: PURCHASE

We are committed to a safe environment. For the safety of our invited speakers, staff, and all attendees, we respectfully request that masks be worn in the venue for the duration of the event. We are currently limiting the capacity of the Auditorium to promote social distancing, so registration is required. We encourage groups to sit together, but please only sit in the designated rows, and keep a respectful distance from other attendees. 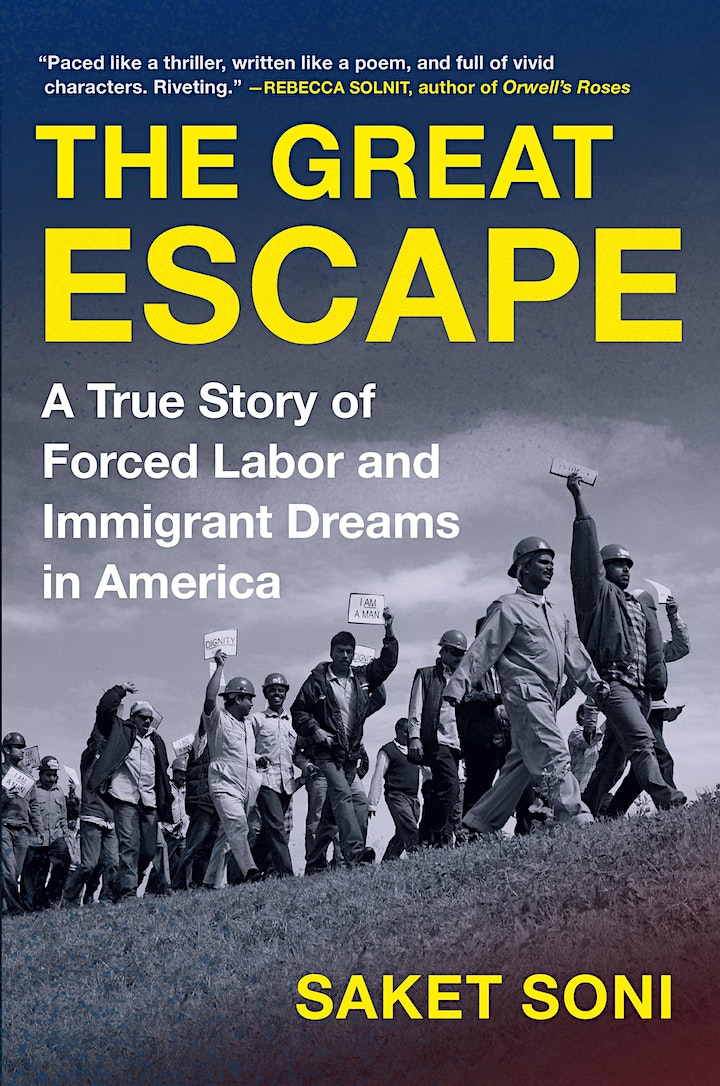 THE GREAT ESCAPE: A True Story of Forced Labor and Immigrant Dreams in America is the stunning story of five hundred Indian workers who were held in those camps, their escape, and the years-long campaign for justice that followed—a labor fight, herculean in effort and impact, engineered by Saket Soni. THE GREAT ESCAPE is a masterful, humane, and suspenseful feat of narrative nonfiction that joins in the literary tradition of such virtuosic exposés as Matthew Desmond’s Evicted, Katherine Boo’s Behind the Beautiful Forevers, and Bryan Stevenson’s Just Mercy. Bringing to light the invisible migrant workforce that rebuilds after climate disasters, THE GREAT ESCAPE reveals the government and corporate corruption fueling a hidden struggle at the intersection of climate change, racial justice, and immigration.

In October 2006, a year after Hurricanes Katrina and Rita devastated the Gulf Coast, hundreds of workers from India were lured to the still-battered shores of Texas and Mississippi. The climate disasters had led to a boom in repair work for the oil-rig builder Signal International, which turned to the global labor market to fill its welding and pipefitting jobs. These Indian workers were skeptical of US recruiters, but the presence of a liberal American immigration lawyer among the recruiters—together with assurances of good work and green cards—convinced them. They paid twenty thousand dollars apiece, taking on crushing debt and leaving behind parents, partners, and children for a chance at a new life in the promised land. The mood on board their flight was jubilant:

As the plane taxied for takeoff, they cheered…Some rang a constant peal of bells for drinks, as if they were on their way to their daughters’ weddings. Flight attendants ferried shots up and down the aisles. It was a transatlantic flight fueled by elation…Later, as they crossed over the North Atlantic Ocean, a hush fell and their joy sublimated into wonder…They thanked God, and Jesus, and Ganesh, and Allah.

Upon arrival, the workers were placed in “man camps,” where they were subjected to wretched living conditions, round-the-clock work shifts, disease and infection, and a diet of moldy bread and frozen rice. Soni helped them plan a daring escape from camp—but it was only the beginning of a brutal fight for freedom. Hunted by ICE officials, ignored by politicians, and degraded in the press, the men were left adrift, out of work, and undocumented in a country whose leaders and institutions remained hostile to immigrants. Soni’s is a gripping first-hand account of the workers’ march from New Orleans to Washington, twenty-three-day hunger strike, and struggle against corrupt federal agents and turncoats in their own ranks. In the end, they won a path to citizenship—and thirty-nine million dollars in court.

Writing with a novelist’s eye for detail, Soni crafts moving portraits of the workers who found themselves the accidental leaders of an unlikely labor movement. He also reveals the fascinating histories of the federal agents, lawyers, politicians, and corporate overlords whose lives intersect with the campaign—along with his own deeply personal immigrant journey.

To pre-order a copy of THE GREAT ESCAPE to be picked up at the event, please place your order from our friends at Charis Books and More in Decatur by clicking the following link: PURCHASE 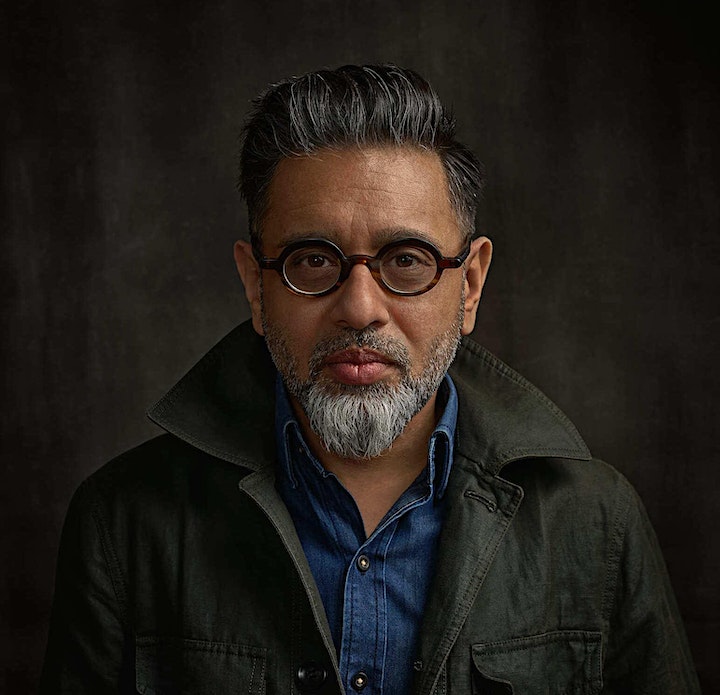 Saket Soni is the founder and director of Resilience Force, a national nonprofit that advocates for the rising workforce that rebuilds after climate disasters. He was profiled as an “architect of the next labor movement” in USA Today, and his work was the subject of a November 2021 New Yorker feature story (in the magazine and the New Yorker Radio Hour), in which the author called him "truly one of the most interesting people I have ever met in my life." He has testified before Congress on issues of immigration and labor rights. Originally from New Delhi, Soni lives in Washington, DC. 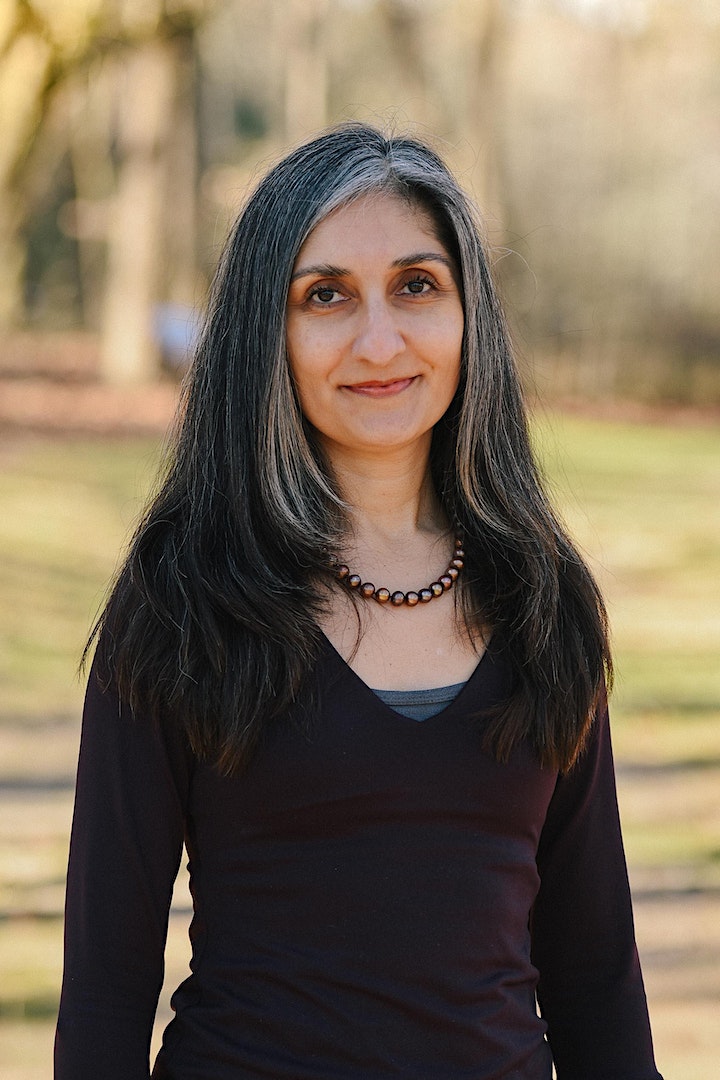 Anjali Enjeti is a former attorney, organizer, journalist, and MFA instructor based near Atlanta. She is the author of Southbound: Essays on Identity, Inheritance, and Social Change, and The Parted Earth. Her other writing has appeared in the Los Angeles Times, Boston Globe, Harper’s Bazaar, Oxford American, and elsewhere. She teaches creative writing in the MFA programs at Antioch University in Los Angeles and Reinhardt University in Waleska, Georgia.

Anjali is the recipient of the 2022 Georgia Author of the Year Award for First Novel, a gold medal for Best Regional Nonfiction from the Independent Publisher Book Awards, and is a finalist for the 2023 Townsend Prize for Fiction. She has also received awards from the South Asian Journalists Association and the American Society of Journalists and Authors, multiple Pushcart Prize nominations, two notable mentions in The Best American Essays series, and residencies and fellowships from Sundress Academy of the Arts, the Hambidge Center, and Wildacres.

Since 2017, Anjali has been working to get out the vote in Georgia’s Asian American and Pacific Islander community. In 2019, she co-founded the Georgia chapter of They See Blue, an organization for South Asian Democrats. In the fall of 2020, she was a member of Georgia’s AAPI Leadership Council for the Biden Harris campaign. She currently serves on board for Emerge Georgia and on the endorsement committee for the Asian American Advocacy Fund.

Charis Books and More is the South's oldest independent feminist bookstore, celebrating radical and independent voices in the heart of the South since 1974! Located in Decatur, Georgia, part of the metro-Atlanta area, Charis is also school store partner for Agnes Scott College. Charis specializes in diverse and unique children's books, feminist and cultural studies books, books on anti-racism and ending white supremacy, and lesbian, gay, bisexual, transgender, and queer fiction and non-fiction.