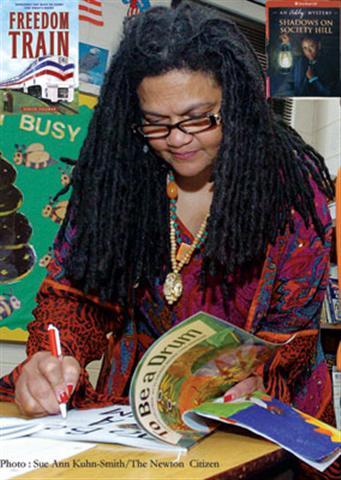 Evelyn Coleman is the award-winning author of a dozen books for young readers as well as numerous short stories, essays and a novel for adults published over a long writing career. A resident of Atlanta, she is the author most recently of "Freedom Train," a 2008 book for young readers, which was chosen in 2010 for inclusion on the Georgia Center for the Book's first list of "25 Books All Young Georgians Should Read." Her novel is a "touching, humorous portrait" of life in the segregated South of the 1940s that focuses on a young white boy's awakening to the realities of race around him.

Evelyn Coleman was born in Burlington, NC in 1948 in her grandmother's home. Her parents built their home right next door, and that is where she grew up. Her mother was a school teacher and helped inspire young Evelyn with the importance and fun of reading. In a writing career than spans more than three decades, she has written a series of young adult and juvenile books and received a number of honors for them including an Edgar Award nomination for "Shadows on Society Hill," the Georgia Author of the Year Award and the Atlanta Mayor's Literary Fellowship. Her books have received the Parents Choice Honor Book Award, the Carter G. Woodson Award, been named a Smithsonian Notable Book and been listed as a "pick" by the American bookseller's Association.

Her adult novel, a thriller about race and eugenics set in Atlanta titled "What's a Woman Gotta Do," was published in 1999. Her adult short stories and essays have been included in several anthologies, among them "Proverbs for the People," Shades of Black: Crimes & Mysteries by African American Writers" and "Black Women Writers on motherhood." Her stories and articles also have appeared in Essence magazine, the Utne Reader, Jive and Southern Exposure. She is a past president of the Mystery Writers of America, SE, and a member of International Thriller Writers.

Coleman has written of herself: "Ever since I was a small child I cared about the world at large. I wanted everything to be fair and equal. Growing up in the segregated South gave me a lot to work toward. Over the years I continue to marvel at the changes both positive and not so positive, but it always gives me hope that every day people are striving to do the right thing. I have come to understand that 'the right thing' is often shaped by a person's view of the world. And in that sense I would like my books to force people to have to look through the eyes of others, to feel empathy, to try understanding their opponents, to fight for justice for everyone."

In 2012, she joined the advisory council of the Georgia Center for the Book.