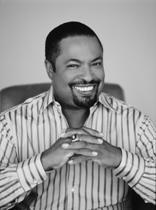 Everette Lynn Harris was born in Flint, Michigan, on June 20, 1955. He grew up in Little Rock, Arkansas, studied journalism at the University of Arkansas where he was a cheerleader. After college, he went to work for I.B.M. selling computers. He began writing in his mid-30s, and his first book, "Invisible Life," was self published in 1991. The book was "discovered" by agents after a bookseller at Atlanta's Outwrite bookstore praised it, and it was then published in a nationally distributed trade paperback edition. Harris was openly gay, but lived for many years in denial, and he drew upon his own experiences in his books "to make credible the emotional conflicts of his characters," according to The New York Times obituary. The Times' obituary wrote that his books "married the superifcial glamour of jet-setting potboilers with an emotional candor that shed light on a segment of society that had received little attention: black men on the down low -- that is, men who are publicly heterosexual" but privately possess homosexual feelings. Harris took pride in his ability to tell stories for everyone: "The lessons I have learned are not limited to race, gender or sexual orientation," he said when his memoir was published. "Anyone can overcome a broken heart. Every life is a story worth telling."