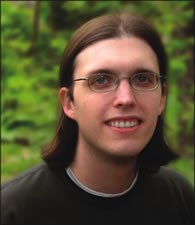 Andy Runton is the prize-winning creator of a popular series of graphic novels featuring a kind-hearted owl, Owly, who is always searching for new friends. In 2010, his book "Owly" was chosen for inclusion on the Georgia Center for the Book's list of "25 Books All Georgians Should Read."

Andy Runton was born in 1974 in Jacksonville, Florida and moved to Lilburn, GA in 1988 and has lived in the Atlanta area ever since, currently making his home in Roswell. He is a 1992 graduate of Parkview High School and was graduated from Georgia Tech in 2000 with a master's degree in industrial design from the College of Architecture. He has worked on a series of design jobs and was employed by Motorola in Alpharetta 2000-2002 doing graphic design/interface design. When the economy suffered a downturn, he lost his job "and after much soul-searching decided to follow my heart and draw Owly," he writes. Since then, he has devoted himself full-time to drawing. His Owly series has won him multiple awards in the comics and graphic novel community invluding the Howard E. Day Memorial Prize, the Harvey Award, two Ignatz Awards, and the 2006 Eisner Award for "Best Publication for a Younger Audience."